Thrifting my Way Back to my Tuscan Roots 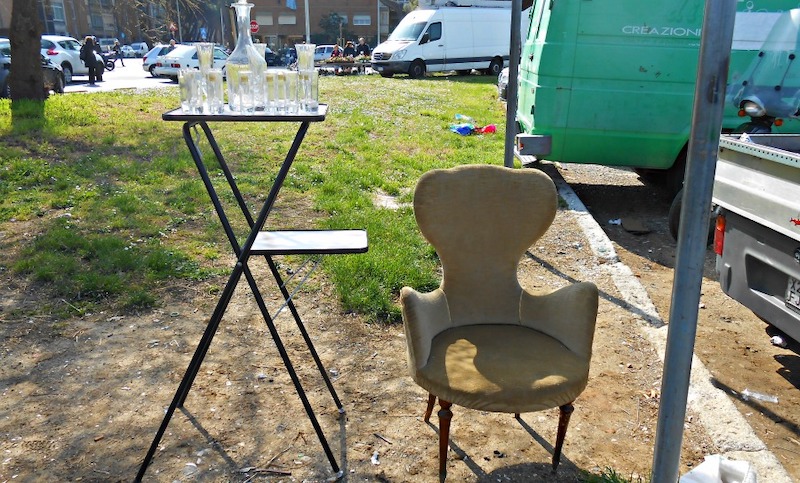 I know I promised not to be sappy, but a little family history will make this story that much more special. My grandmother, Nonna, as everyone appropriately called her, grew up in Livorno, Italy. She loved it, she missed it. She talked about it all the time. Naturally, as soon as I could, I went to there to find Nonna’s childhood home, and reenacted black and whites I had found of her and my American-soldier grandpa when he was stationed there on post-WWII bomb-cleanup and find-gorgeous-Italian-war-bride expedition. Although the address had changed, the home was still marked by my inherited name “Villino Gina” Gina’s Little House. 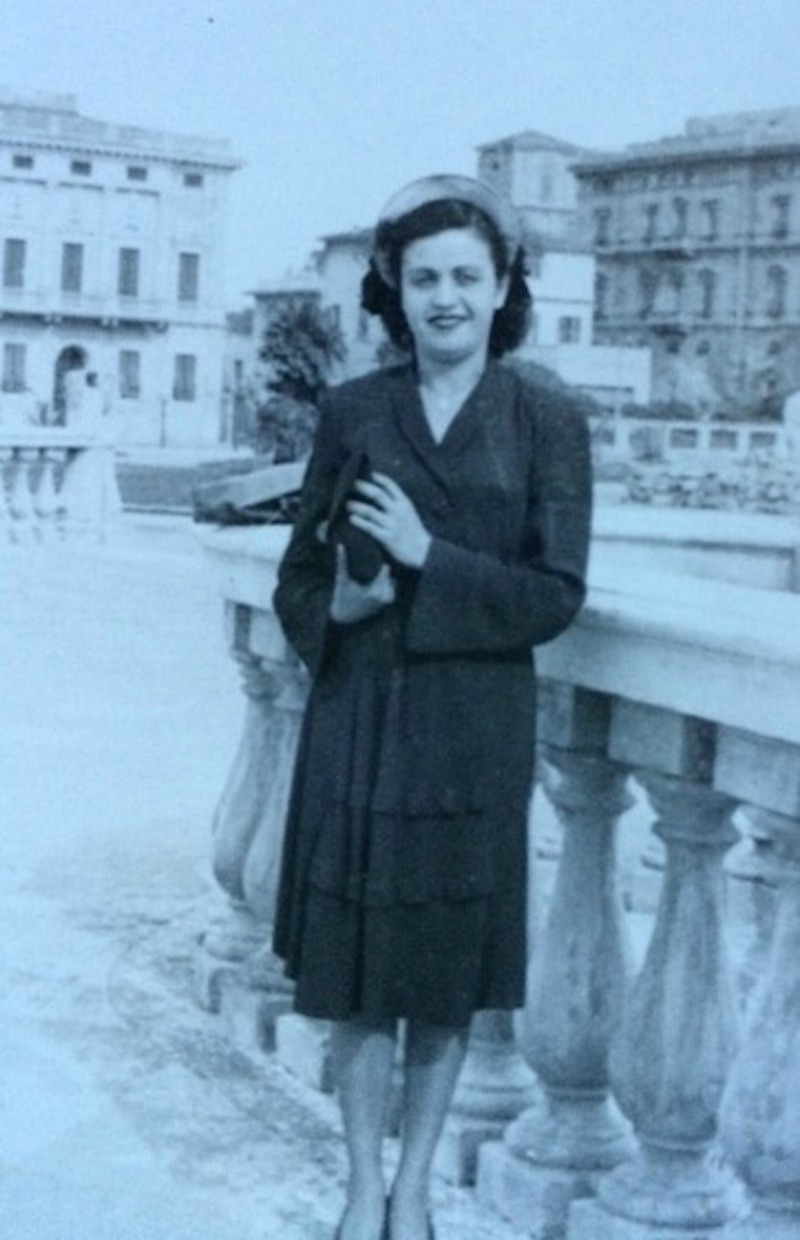 Now, many years later, I have had the opportunity to appreciate Livorno for its own history, rather than just mine. Livorno is in itself vintage. It is Italy the way it was, or the way it is when not trampled by unrelenting herds of tourists. Thus, during a trip to visit friends, I set off to find the Friday Street Market.

I hoped that the market would embody the city’s hodgepodge of buildings and people, of history and culture, and its subdued, inherent coolness. A little vignette is what greeted us as soon as we rounded the corner to the street market. I knew we were off to a good start: A group of jovial dudes selling select items out of the back of their truck. The chair was 5 bucks and trust me, if I wasn’t taking the train home it would have been mine!

The next turn was just as colorful. Flowers, succulents, veggies, anything that could have sprung in spring was there, being sold with a smile.

A few more steps and the clothing piles began to rise from the ground. While it was more used clothing than vintage – if you dug for it, you found it. Livorno has one of the largest US Army bases in Italy and I was delighted to see a large pile of authentic army clothes. I have a soft spot for this stuff anyway, so this jacket took very little convincing. A US Army patch on a “Made in Italy” camo sounds like the perfect combo of nostalgia and style to me! 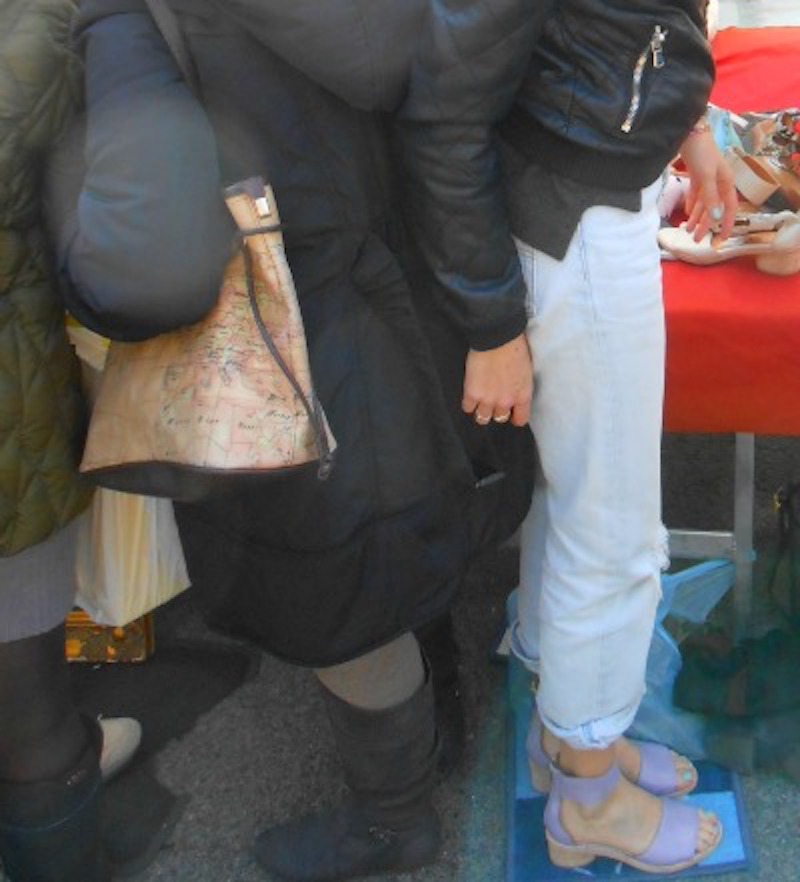 While this market is huge and well known, it was not that crowded. It was only when people wanted a piece of what I had in hand that it would start getting congested. Once I threw on some showroom Jeffrey Campbells the crowds came running!  *Please note, I am ON the little mat. When trying on shoes at markets they strongly encourage you to try them on the mat or cardboard they put down to protect the soles from getting scuffed.

On that note there was a lot of sample sale, showroom, and overstock for sale. I found some great Italian brands I had never seen before and mostly on the funky side. 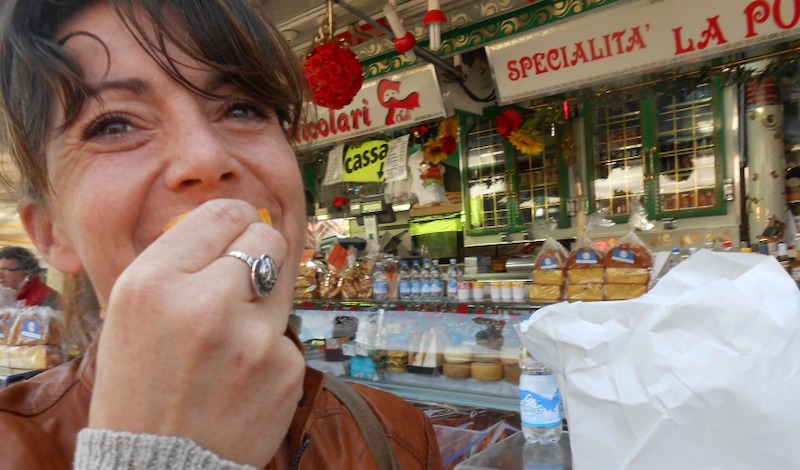 When Italian marketing, remember to stay hydrated and eat fried polenta whenever possible. Shopping takes it out of you. Though seriously, Livorno Street Market also offered a great mix of snacks and Italian specialties.

Some things were more expensive than I am used to, but there were deals to be found nonetheless. Vintage treasures were tucked away in inconspicuous places. Hats from another era and chests full of throw back style. I was also happy to see lots of Made in Italy shoes, bags and scarfs – popular things that you find at tourist-trap markets – but here were great prices and a great selection and no one hanging over your shoulder trying to convince you to “buy-buy-buy” in their best English.

One particular pleasure on offer was the people watching. There were stalls for every interest, age and style. I found myself amongst some passionate thrifters and loved it!

I was also pleasantly surprised to see some great stone and glass beads, not the same-old badly colored fakes that I usually see at street markets. The vendors were so sweet, let me look through their lens to see the eclipse happening that day and taught me that stone beads can be picked out of a “crowd” because they stay cool to the touch.

Running into a surfer-hippy-painter-collector-dreamer-chatter extraordinaire was like finding a diamond in the rough. Usually there is a clear distinction between regular street markets and antique flea markets in Itay that are held on Saturdays and/or Sundays. But this gentleman (Francesco of course) had something for everyone and had even painted several of the gems on sale. 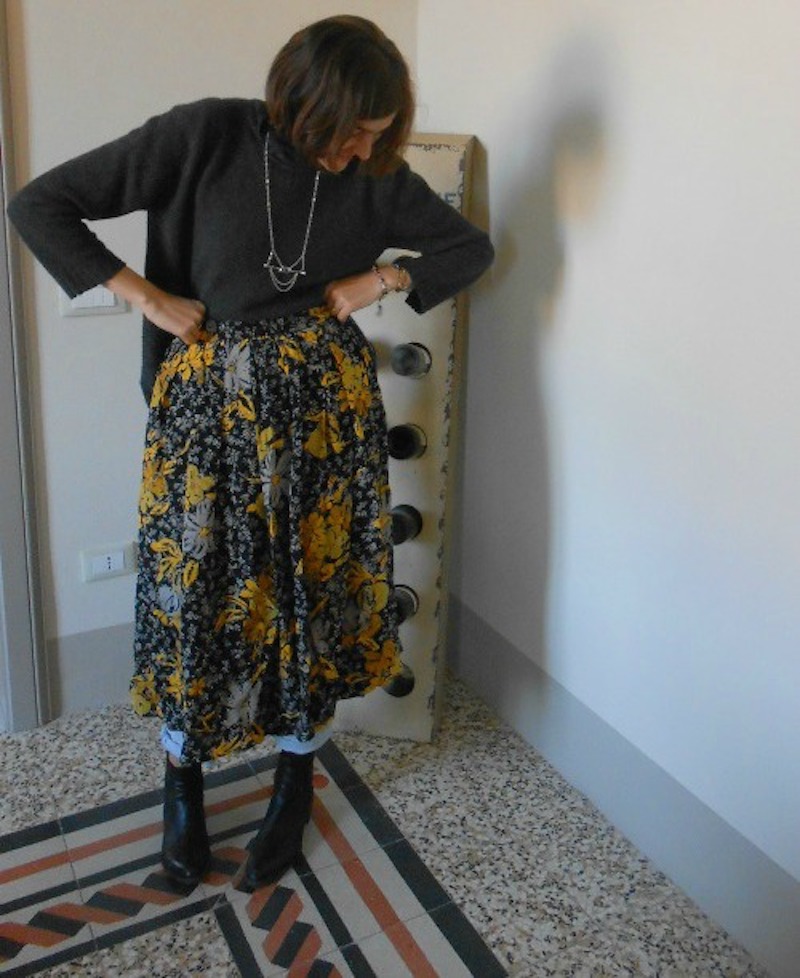 So in the end, I went home with an US Army jacket Made in Italy. A skirt I will abuse with abandon in the summertime. Something lilac and girly, which I have been craving in my closet, the coolest black vase and a painting by a local Livornese of the beach where my beloved Nonna grew up called “Dancer’s Point”. Upon leaving, I felt like I had woken up from a dream that was Livorno.

Can’t wait to keep exploring this underrated  magical place and everything it has to offer. 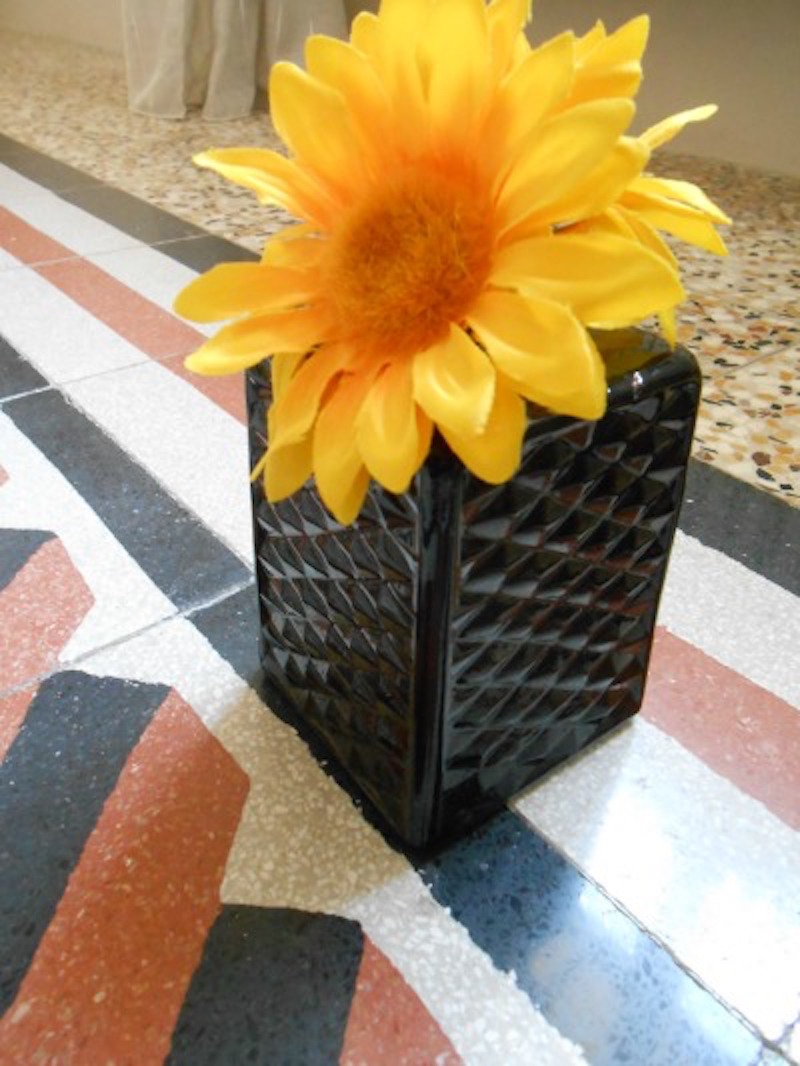