My Favorite Finds: Relics of the Paninari 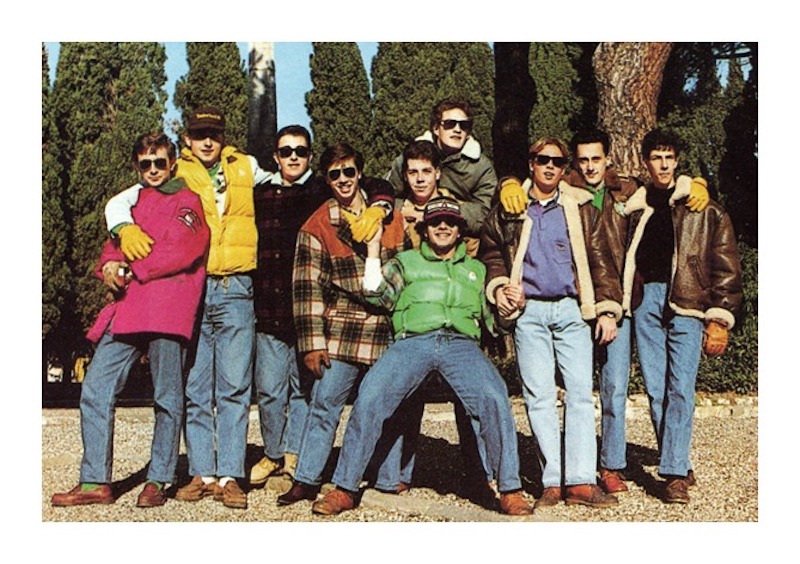 It is a secret to no one, I love the 80’s. I loved the tail end that I got to grow up in and kept elements alive in what I wore, under the scrutiny of my peers, until it came back in to style in the early 2000’s. What I loved most about 80’s style was the complete abandon to wear whatever you wanted and wear a lot of it. It was so intuitive, passionate, colorful and iconic. So it comes to no surprise once I found out about the Italian 80’s icons, I became obsessed. The Italian 80’s style culture that really makes me giddy is that of the Paninari. 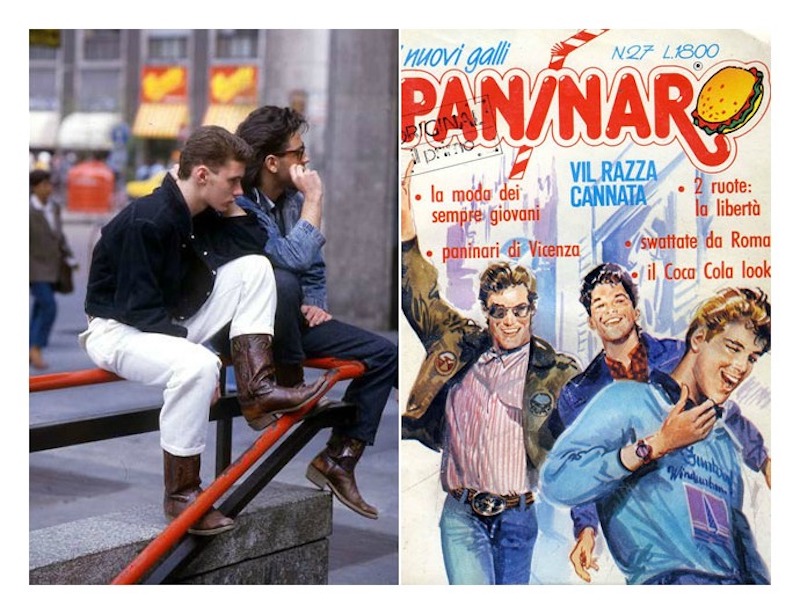 The Paninaro was a counter culture to the counter culture riddling Italy in the 80’s. They were proudly mainstream and rocked certain rather pricey brands with exclusivity. So as you can imagine this subculture was started by the wealthy private school kids in the center of Milan who gathered around the bar called al Panino that served hamburger-style sandwiches. Panino means sandwich in Italian, and I actually had a giggly aperitivo there not even knowing it was a birthplace of my 80’s Italian idols (no burgers anymore). After this trend caught on the hang out became an American fast food restaurant in the boppin’ part of Milan’s San Babila square called Burghy (like burger, haha!). 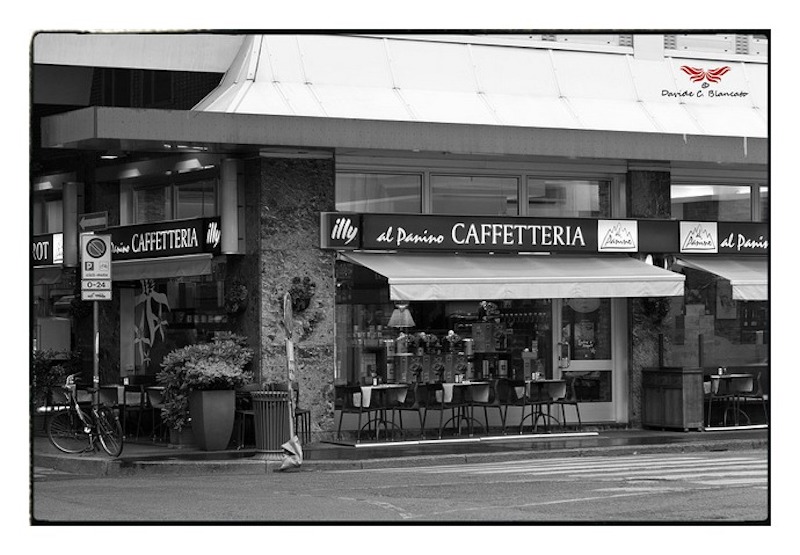 There are less pictures than I thought documenting Paninaro style. I should be going through my friends shoe boxes for the real proof! However this picture above is a spectacular group of Paninari (for those of you who don’t speak Italian Paninaro is singular; plural: Paninari;  feminine: Paninara; feminine plural: Paninare)

Why do I love Paninari? Their extravagance, their cult, and most of all their love for Americana. 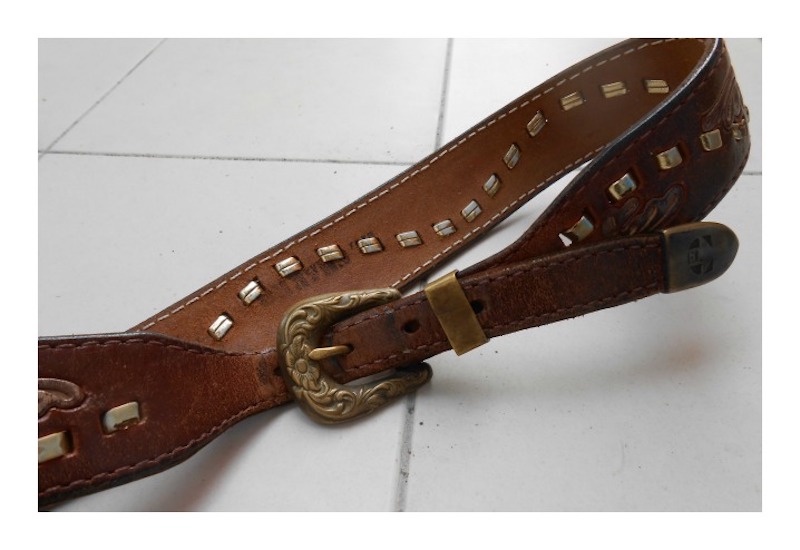 It all started when going through my friend’s bedroom, something I do a lot when at my Italian friend’s houses they grew up in. They are always stocked with treasure. I stumbled across an immaculate western belt with heavy brass hardware and immaculate embossing. It was “El Charro”, a brand that was extremely representative of the Paninari. This relic encouraged storytelling and youtube videos and the more I learned the more i loved it. And I must say every time I ask to hear a story of the Paninari, it is told with smiles, laughs and a a lot of impersonations! 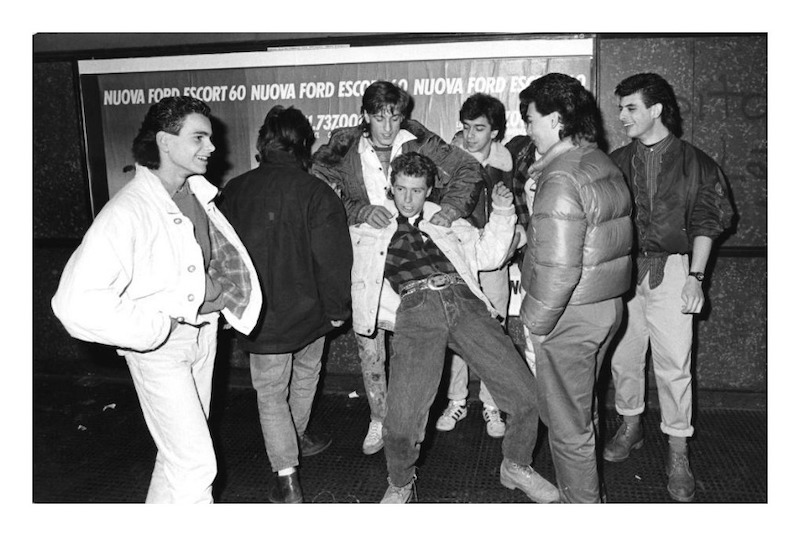 To get a better grasp on it all I sat down with a woman who grew up in Milan in the years that were the heart of it all. Although she claims she was an anti-Paninara she was a fountain of information nonetheless. She explained that  the meeting place was in San Babila square where Burghy was also had other Paninaro outlets such as a shop called Americanino or “little american” that sold imported American products integral to the look. C’mon Burghy and Americanino, how could an American living in Italy not love this! The look she explained was rigorously high waisted tapered Levi’s or Roy Roger’s rolled or hemmed high enough to show off your Burlington brand socks that were either argyles or some other showy color. Fruit of the Loom tees could be worn under a shearling denim jacket or a button-up plaid shirt , but the tee’s collar always had to be visible. 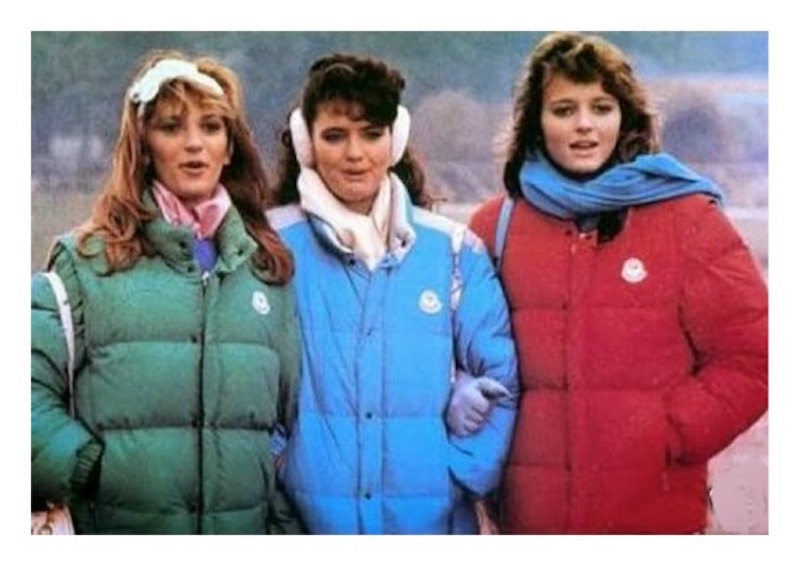 In the winter Timberland “work” or Catapillar boots were worn with a colorful Moncleir down jacket or a down vest worn over the shearling denim jacket. In the warmer season Timberland boat shoes were worn, but always with the colorful socks, don’t forget. Shoes could also be cowboy style boots by El Campero a hand made in Italy brand with a heavy American style. Girls wore big bows, loved pastels and wore Superga Italian tennis shoes and everyone tells me about the Best Company sweatshirt they once had in their closet. Brands, brands brands even when it came to vehicles. Paninari drove predominately Zundapp motorcycles and my source explained that their San Babila hang-out was littered with these guys zipping around and talking to one another up in their heavy Milanese accents. 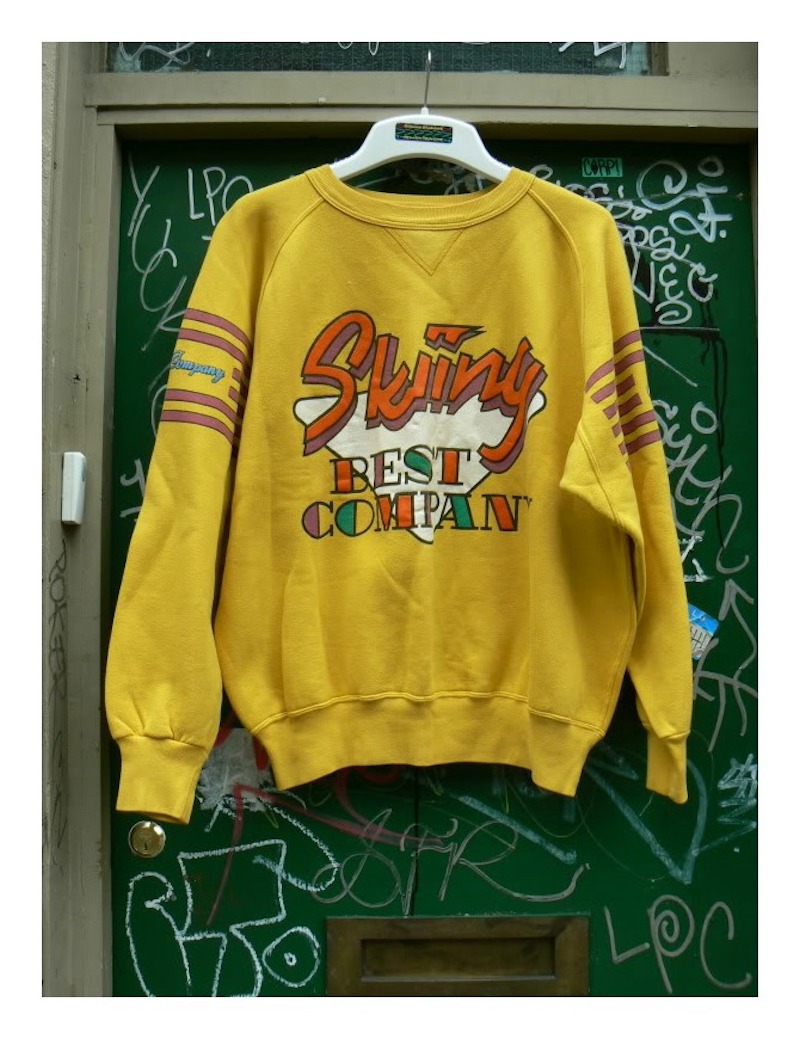 So as you can imagine while thrifting all over Italy I love finding the brands that I consider relics of this 80’s fashion movement that includes nostalgic Americana and priceless Made in Italy vintage. My favorite is still my El Campero backpack and all its detail. 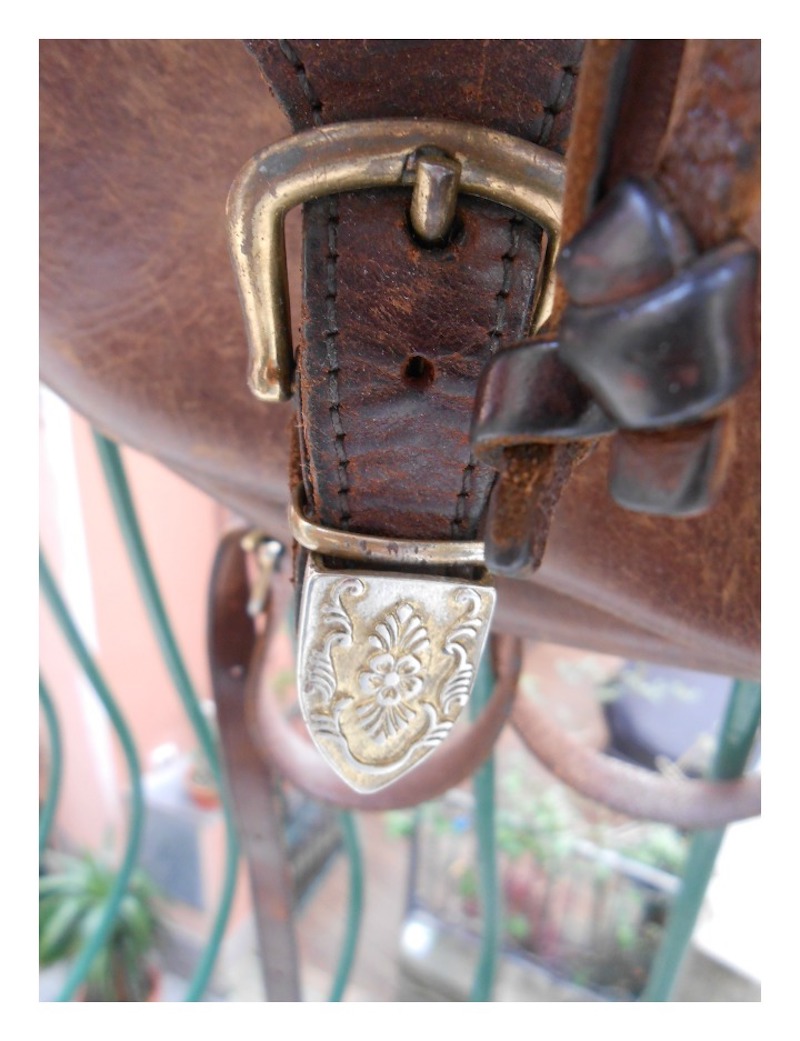 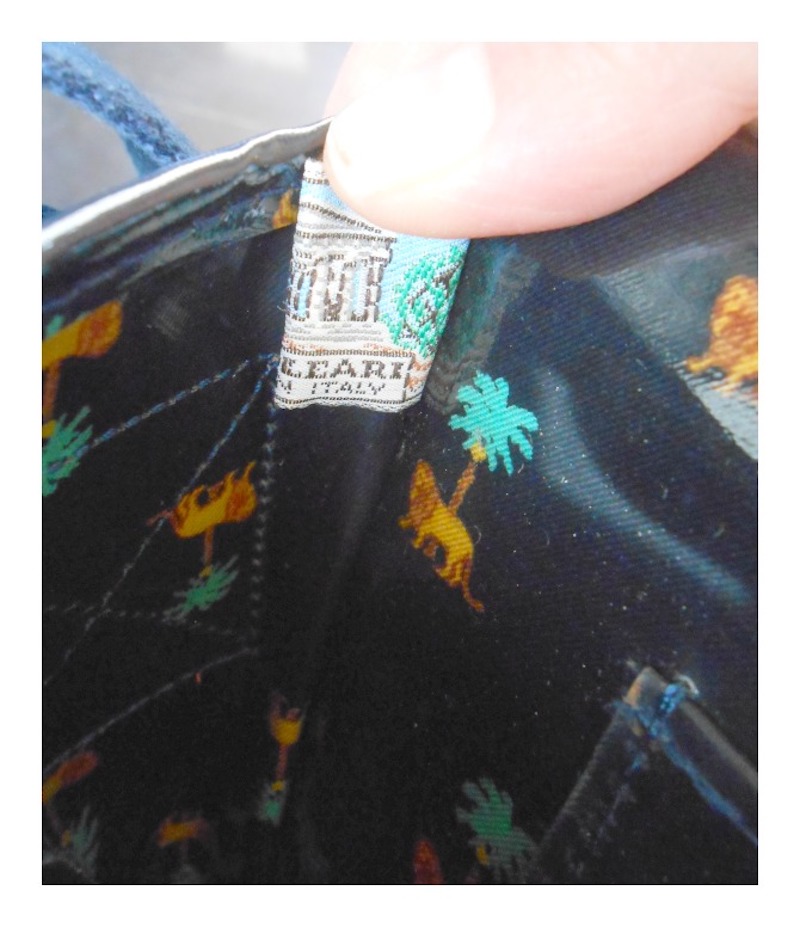 Naj Oleari prints always catch my eye at markets too, because they are so playful and colorful. These bags were purses loved by the Paninara. 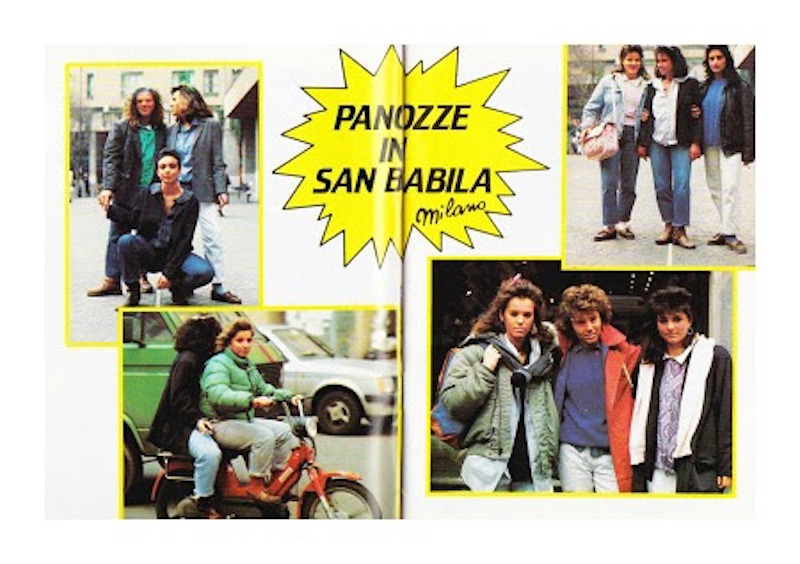 So as you can see after piecing together my favorite finds I realized most of them were born by the oh so 80’s Paninari. Other colorful, detailed and Americana inspired clothes and accessories that played off this style pop up too, and they are just as fun to incorporate in your wardrobe.